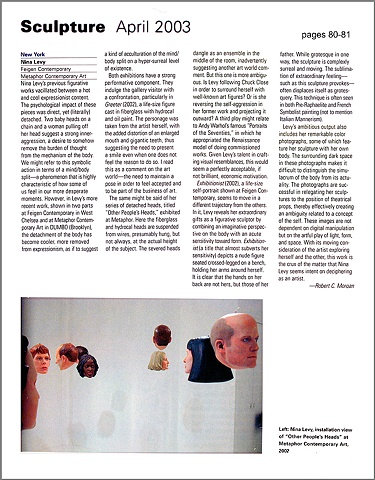 Nina Levy's previous figurative works vacillated between a hot and cool expressionist content. The psychological impact of these pieces was direct. yet (literally detached. Two baby heads on a chain and a woman pulling off her head suggest a strong inner--aggression, a desire to somehow remove the burden of thought from the mechanism of the body. We might refer to this symbolic action in terms of a mind/body split-a phenomenon that is highly characteristic of how some of us feel in our more desperate moments. However. in Levy's more recent work. shown in two parts at Feigen Contemporary in West Chelsea and at Metaphor Contemporary Art in DUMBO (Brooklyn), the detachment of the body has become cooler, more removed from expressionism, as if to suggest a kind of acculturation of the mind/ body split on a hyper-surreal level of existence. Both exhibitions have a strong performative component. They indulge the gallery visitor with a confrontation, particularly in Greeter(2002), a life-size figure cast in fiberglass with hydrocal and oil paint. The personage was taken from the artist herself, with the added distortion of an enlarged mouth and gigantic teeth, thus suggesting the need to present a smile even when one does not feel the reason to do so. I read this as a comment on the art world-the need to maintain a pose in order to feel accepted and to be part of the business of art. The same might be said of her series of detached heads. titled "Other People's Heads," exhibited at Metaphor. Here the fiberglass and hydrocal heads are suspended from wires, presumably hung, but not always, at the actual height of the subject. The severed heads dangle as an ensemble in the middle of the room, inadvertently suggesting another art world comment. But this one is more ambiguous. Is Levy following Chuck Close in order to surround herself with well-known art figures? Or is she reversing the self-aggression in her former work and projecting it outward? A third ploy might relate to Andy Warhol's famous "Portraits of the Seventies," in which he appropriated the Renaissance model of doing commissioned works. Given Levy's talent in crafting visual resemblances, this would seem a perfectly acceptable, if not brilliant, economic motivation. Exhibitionist (2002), a life-size self-portrait shown at Feigen Contemporary, seems to move in a different trajectory from the others. In it, Levy reveals her extraordinary gifts as a figurative sculptor by combining an imaginative perspective on the body with an acute sensitivity toward form. Exhibitionist (a title that almost subverts her sensitivity) depicts a nude figure seated crossed-legged on a bench, holding her arms around herself. It is clear that the hands on her back are not hers, but those of her father. While grotesque in one way, the sculpture is complexly surreal and moving. The sublimation of extraordinary feeling- -- such as this sculpture provokes-- often displaces itself as grotesquery. This technique is often seen in both Pre-Raphaelite and French Symbolist painting (not to mention Italian Mannerism). Levy's ambitious output also includes her remarkable color photographs. some of which feature her sculpture with her own body. The surrounding dark space in these photographs makes it difficult to distinguish the simulacrum of the body from its actuality. The photographs are successful in relegating her sculptures to the position of theatrical props, thereby effectively creating an ambiguity related to a concept of the self. These images are not dependent on digital manipulation but on the artful play of light, form, and space. With its moving consideration of the artist exploring herself and the other, this work is the crux of the matter that Nina Levy seems intent on deciphering as an artist.