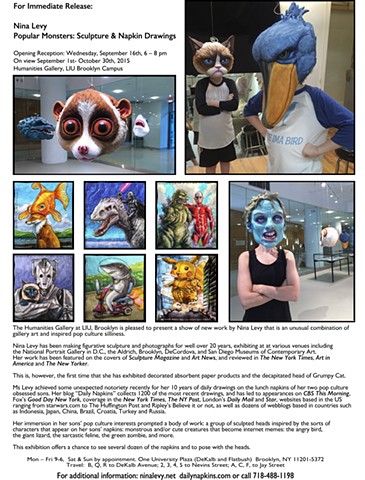 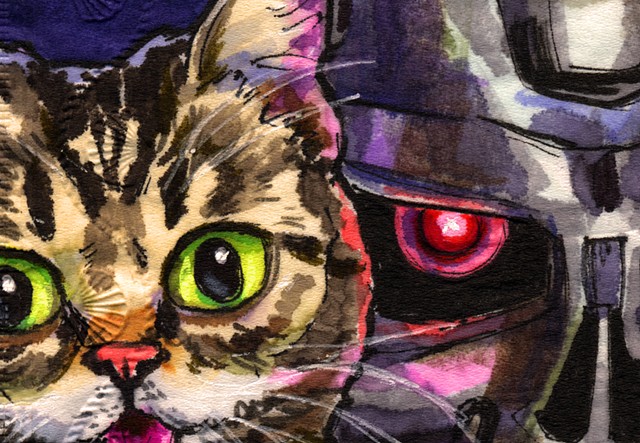 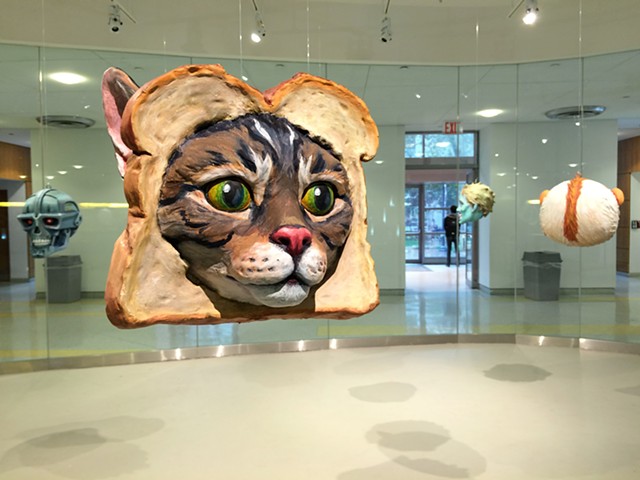 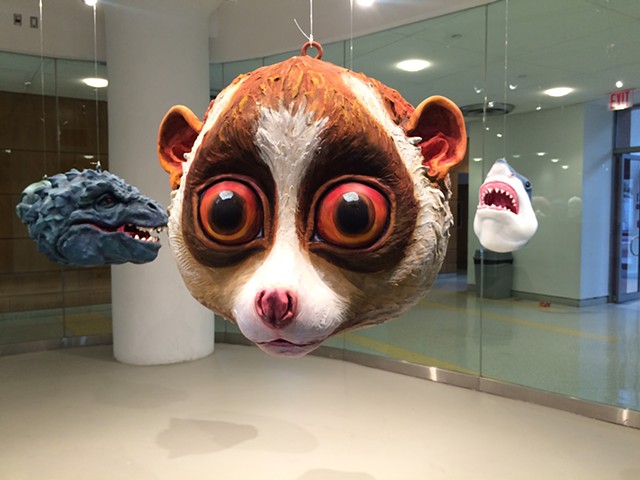 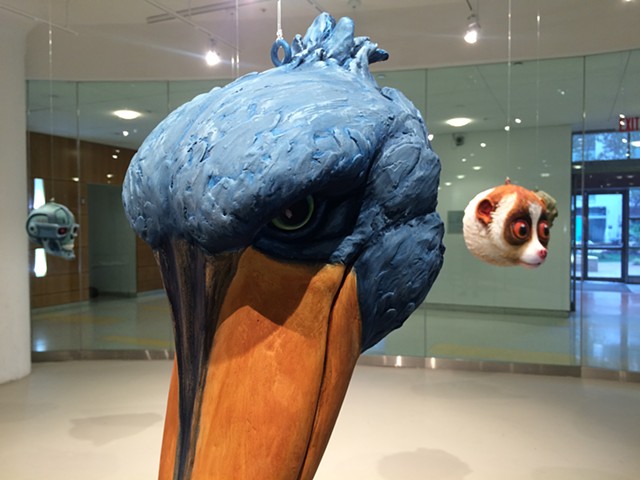 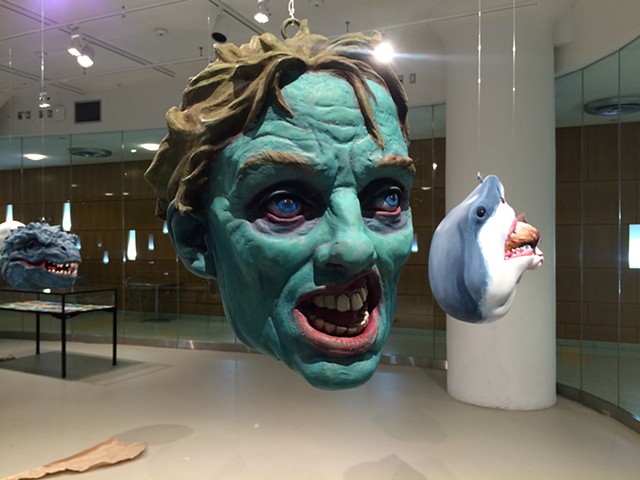 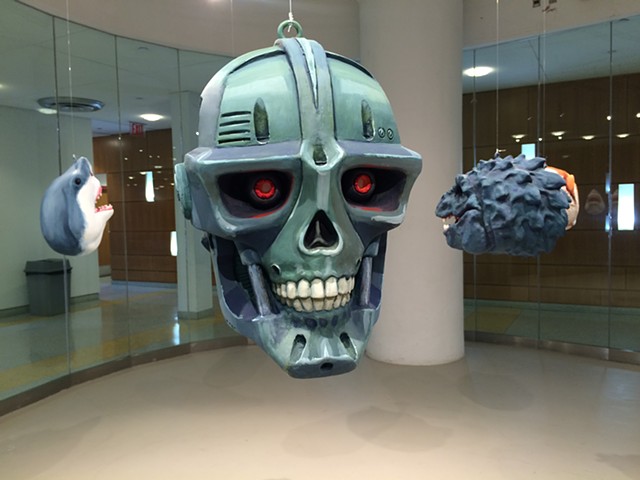 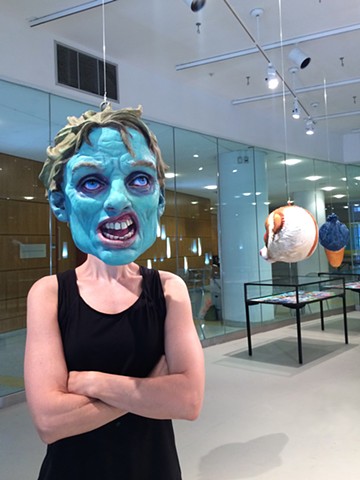 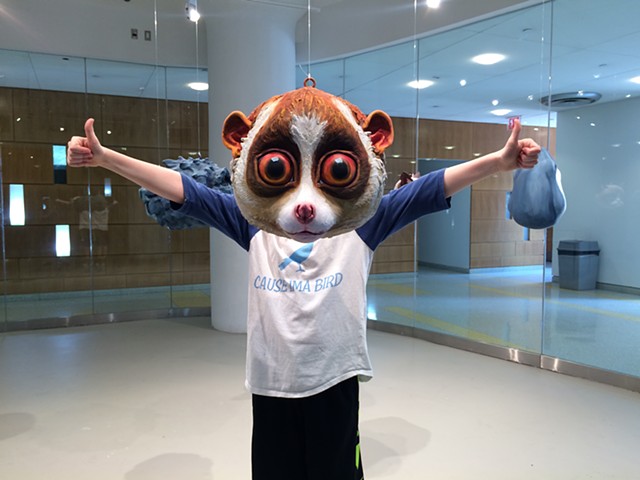 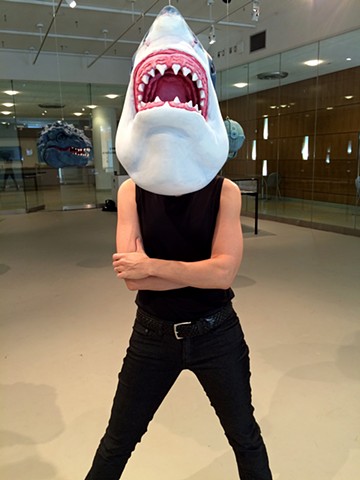 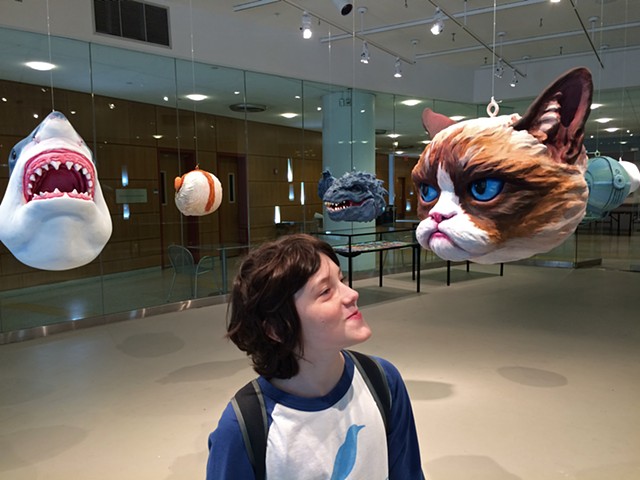 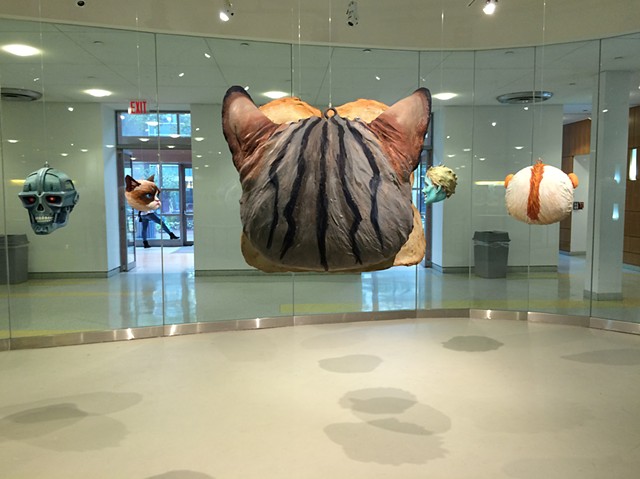 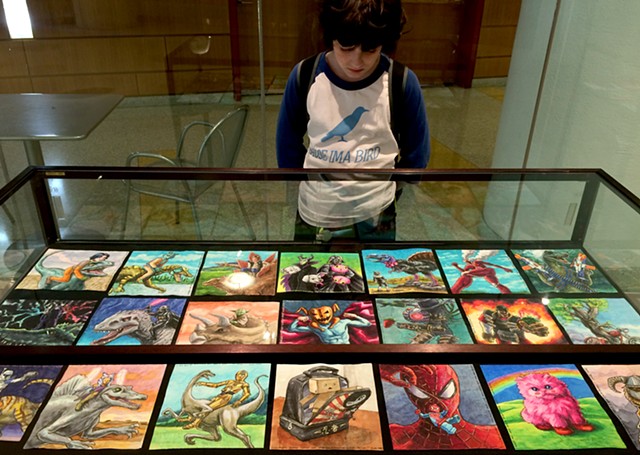 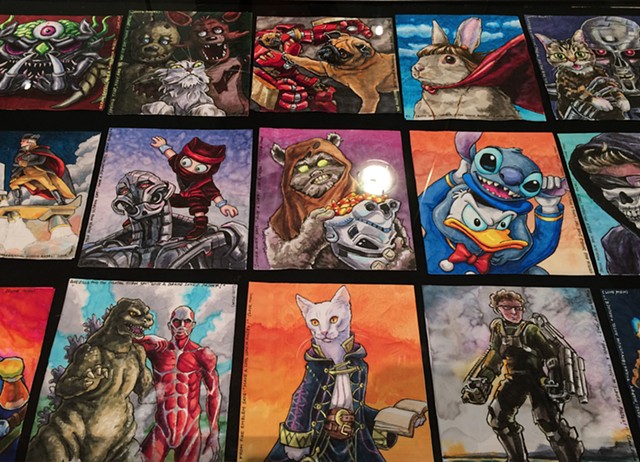 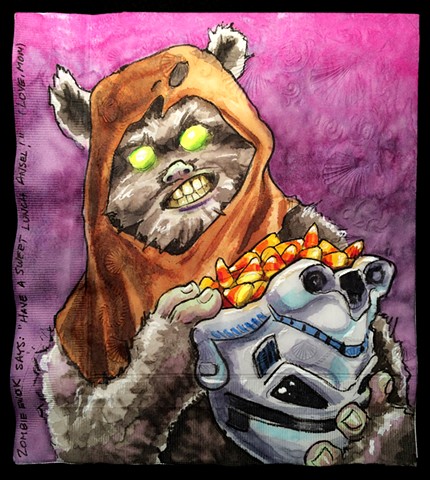 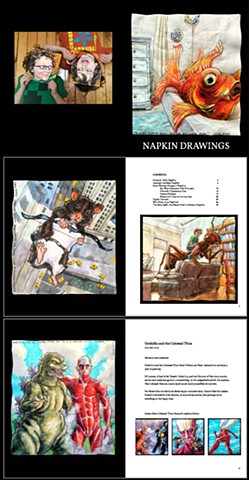 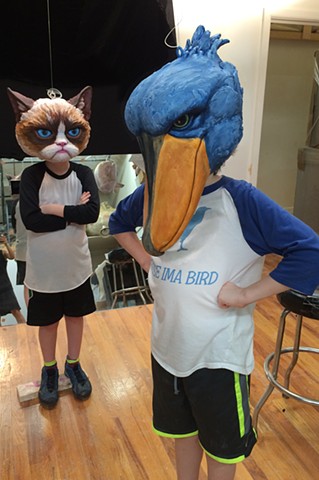 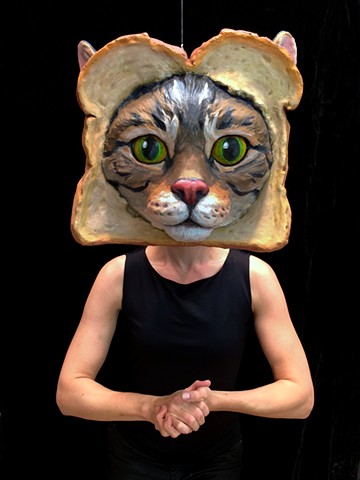 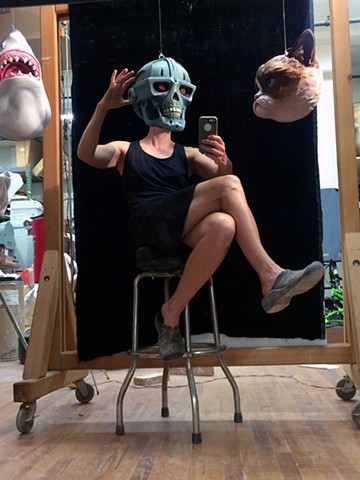 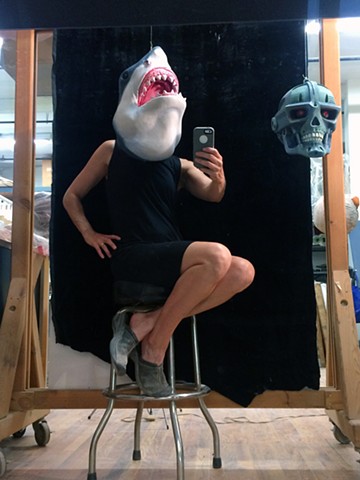 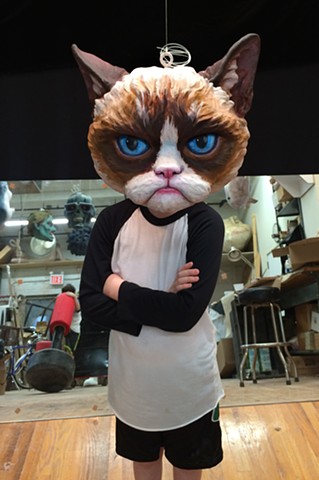 Daily Sculptures
Link to Blog of Work in Progress 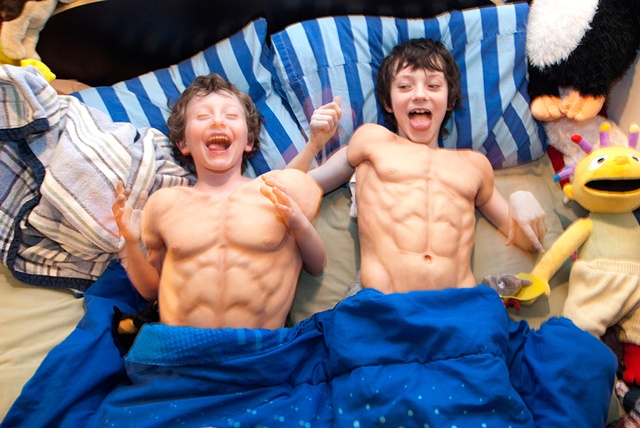 To see images of over 1200 napkins posted online since 2011, organized by various categories, with commentary, visit the blog: Daily Napkins at dailynapkins.com

Slenderman is an intentionally confabulated folk horror character. He supposedly abducts children, but is beloved by many and is a special favorite of my sons. He started as an online fictional character created by one man, but was built into a broad Internet meme by multiple authors in many media. He is usually portrayed as a very tall, thin man in a black suit with tentacle like arms and a blank white, featureless head.

On 2014 in Wisconsin, two adolescent girls cited Slenderman as their motivation when they stabbed a classmate 19 times. He has been mentioned in multiple other cases of youthful destructive behavior.

My sons tell me that I put too much detail into his face and that I should have made it blanker, particularly around the mouth. I explained that I felt entitled to some artistic license in this case. 3. Robot Guy 2015, Cast polyester resin, acrylic and oil paint, 13“ x 10.5” x 9"

There are so many philosophical problems inherent in the idea of sentient, self-conscious machines, yet they are so simply satisfying in their many pop culture incarnations. They make for excellent pals and gratifying adversaries.

I mixed up Terminators, C–3PO, Doctor Who’s Cybermen and Marvel’s Ultron, trying to walk the line between endearing and malevolent.

But while sculpting the head, I found myself mostly thinking about the irony of hand-making in clay a thing that is supposed to be a perfect machine. (Symmetry and rectilinear shapes have never been my strong suit.) Yet, in the days before CGI, all of those Terminators and Metal Men were sculpted by hand by special effects guys.

While Grumpy Cat is certainly not one of the pioneers of the lol cat Internet phenomenon, she is unarguably one of the best merchandised and most thoroughly distributed felines in the world. Some say the Internet is 40% pictures of cats. If this were true, then it would be at least 5% pictures of Grumpy Cat.

Possibly overwhelmed by the cat’s personal charisma, I felt I had to try to a more or less straight portrait of the individual rather than concocting an amalgamation of various internet famous cats.

Everybody loves to hate Sharks. We like to imagine them as unstoppable killing machines, still trying to eat chainsaw-wielding C list actors, even when plummeting out of the sky.

I came of age, pop-culturally speaking, in the mid 70’s, long before “Sharknado” but just in time for the world changing 1975 release of “Jaws” and the subsequent Saturday Night Live “LandShark” skits to “enter the cultural zeitgeist.”

Then and now, Sharks offer an enticing combination of power, fear…and ridiculousness.

Who did we guiltlessly and gleefully maim and decapitate before we were awash in zombies? My sons have yet to see an actual zombie apocalypse movie or TV show, yet they are somehow familiar with, and delighted by, all the conventions. And few activities are more fun than smashing zombies in a video game.

I thought about sculpting a realistic zombie, but decided that the lovely teal green of the “Plants vs. Zombies” child-friendly sort of zombie was more decorative, and appropriate. 7. Untickled Loris 2015, Cast Ultracal, acrylic and oil paint 13.5“ x 12” x 14.5"

The Loris, a mammal that seems too cute not to have been artificially manufactured as an anime or Pokemon character, is actually endangered and exploited while being Instagrammed with celebrities and tickled by insensitive humans in widely viewed YouTube videos. It is also one of the few mammals with a venomous bite, and supposedly all the cute Lorises appearing online have had their teeth tragically removed with pliers.

My kids were not alone in their obsession with the Angry Birds game. The franchise has achieved an unprecedented global cultural saturation. Forbes reports that, as of July 2015, the game series had reached over 3 billion downloads.

The abbreviated, bodiless birds seemed like perfect candidates for a suspended head-only sculpture. While the Whalehead, or Shoebill, Crane is not specifically referenced in the game, it is unmatched in its peculiar and malevolent appearance. These cranes are quite imposing also, reaching 55" in height.

Dragon/Dinosaur/Kaiju/Godzilla: The fan bases for these various creatures can be quite disparate, but oversized, overpowered and often rather implausible reptiles are very compelling for both adults and children.

While not really a dinosaur enthusiast, our older son is a Kaiju and Godzilla expert and can describe all of the subtle differences between the various iterations of the franchise.

I tried to sculpt an acceptable mixture of mostly fictional monsters without making the piece look too much like any character in particular.