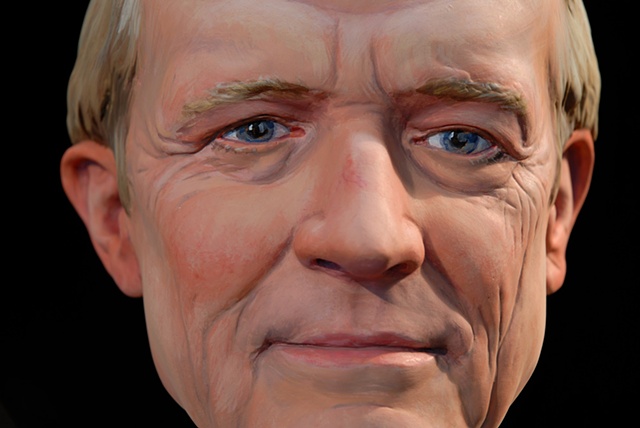 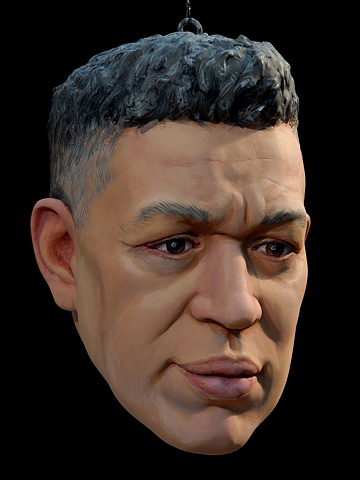 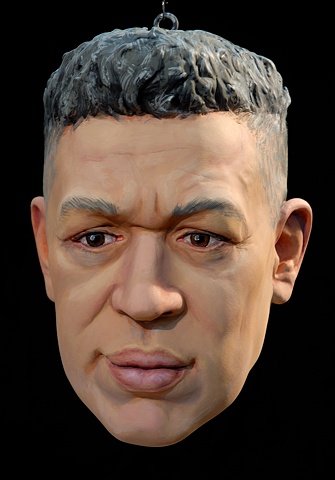 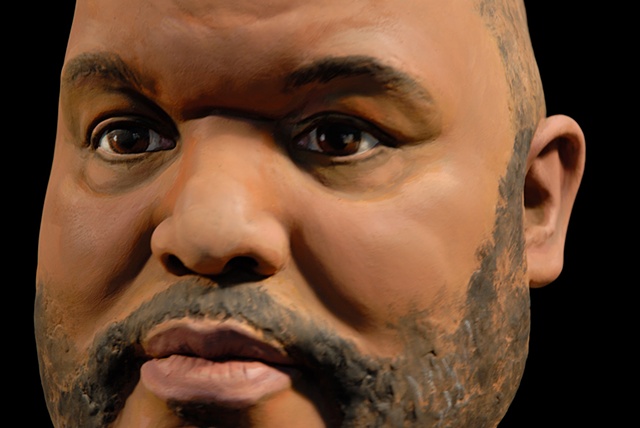 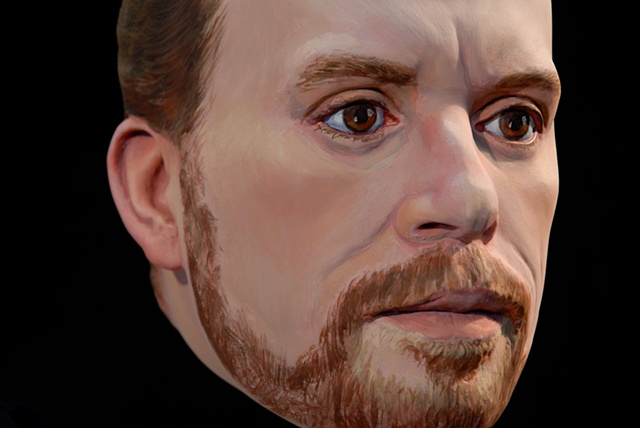 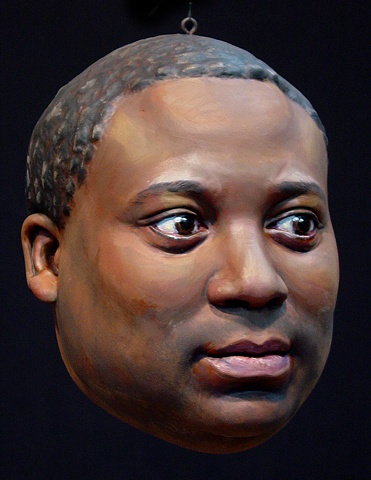 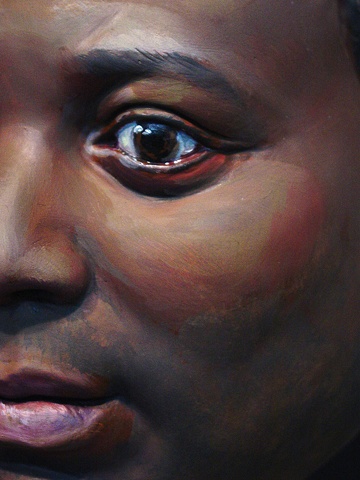 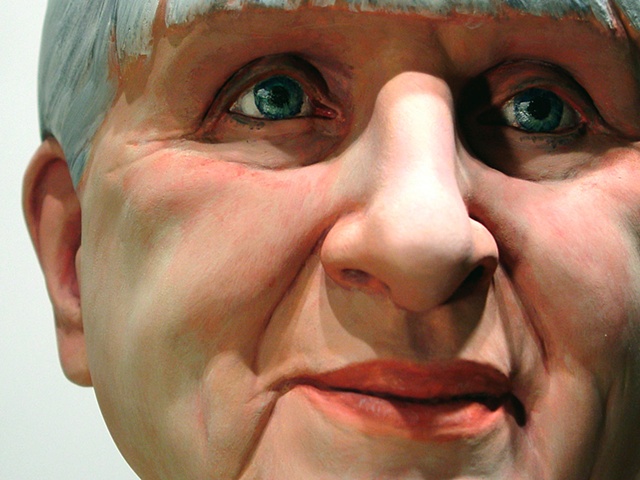 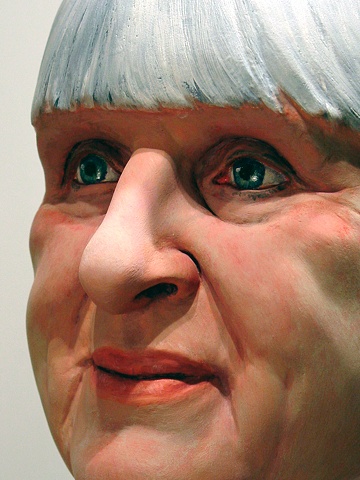 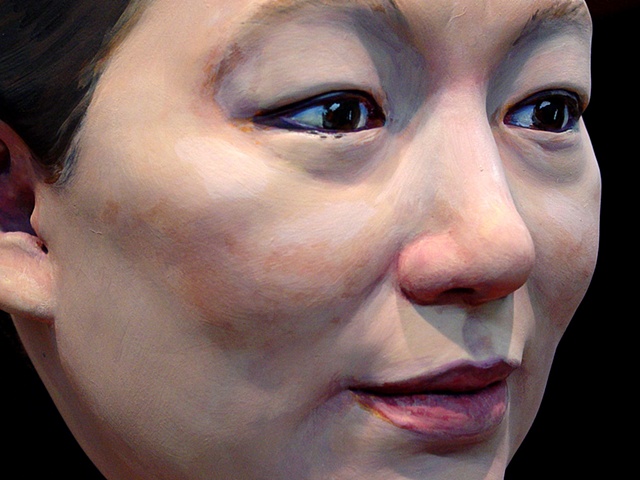 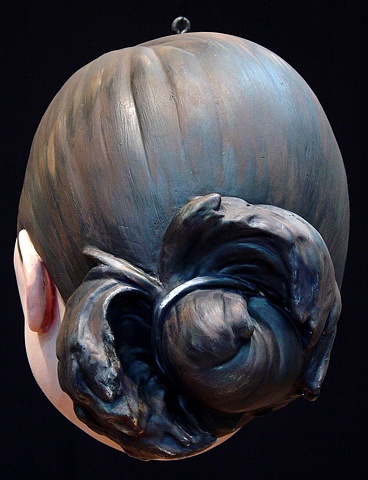 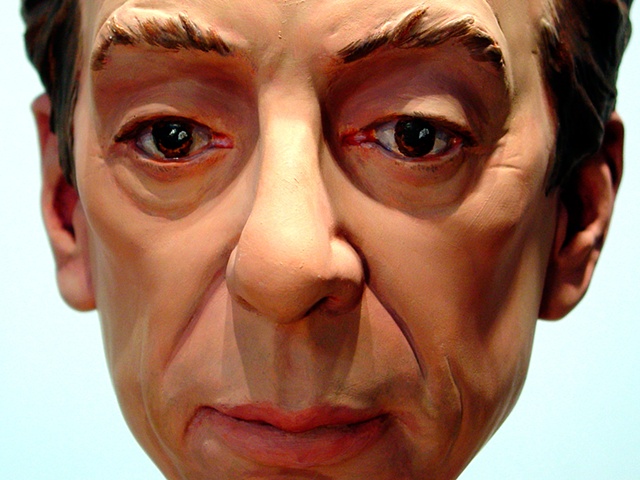 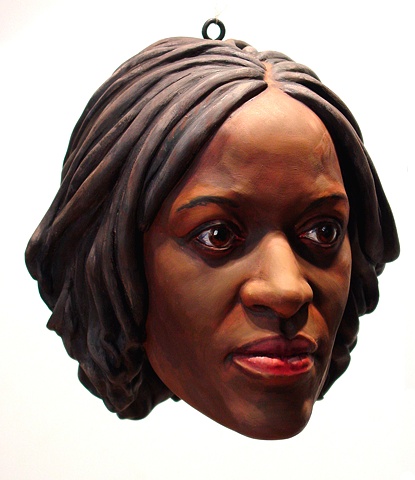 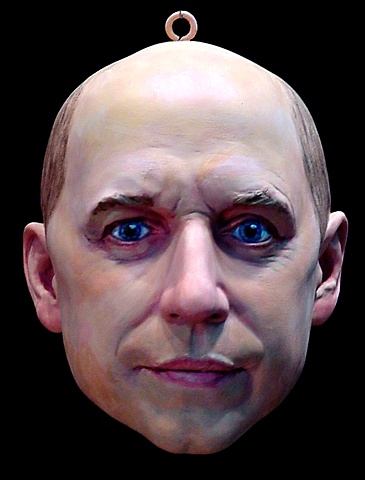 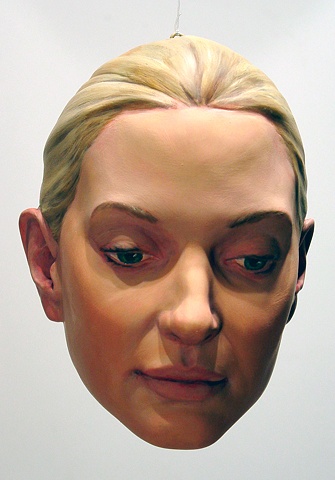 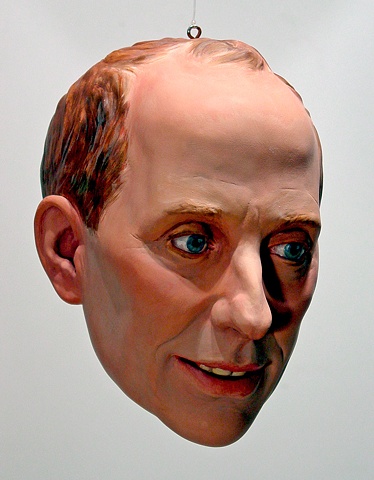 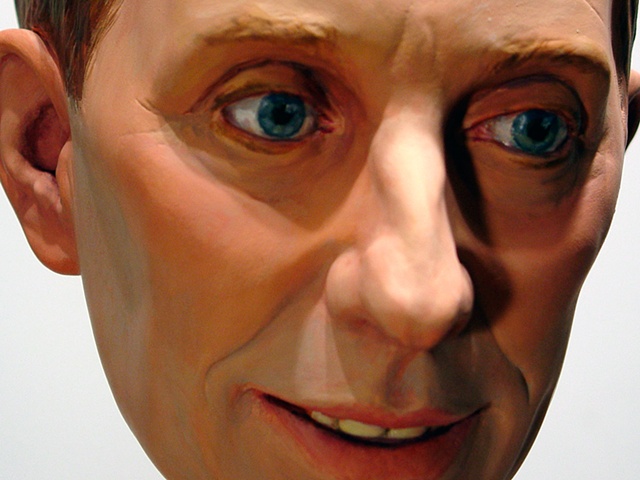 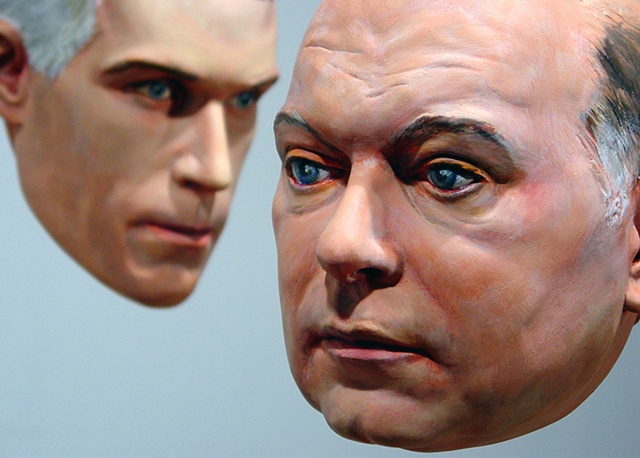 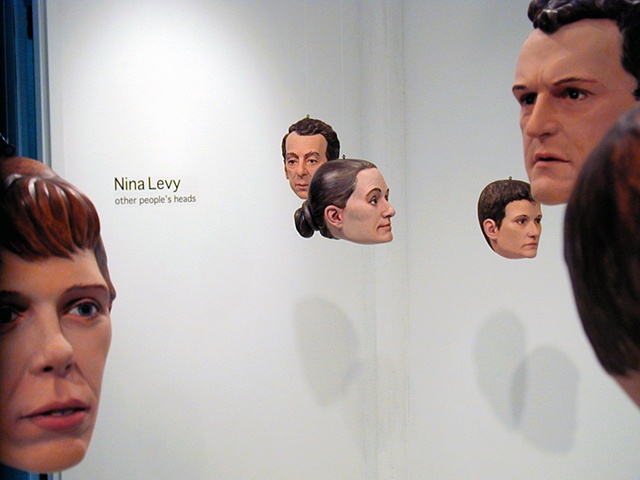 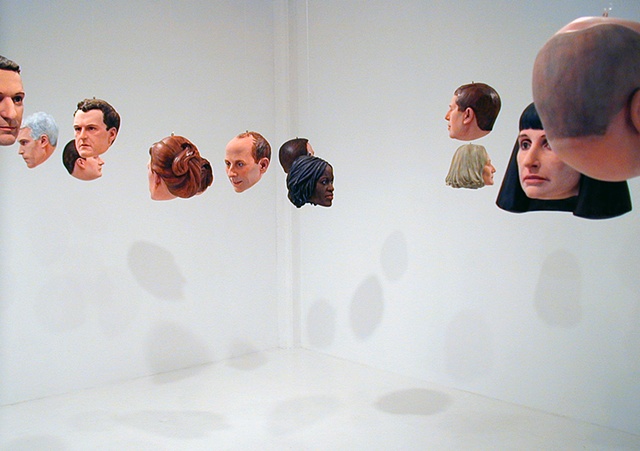 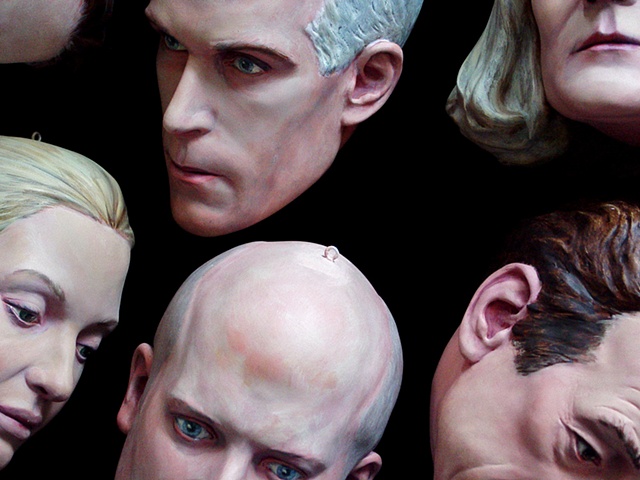 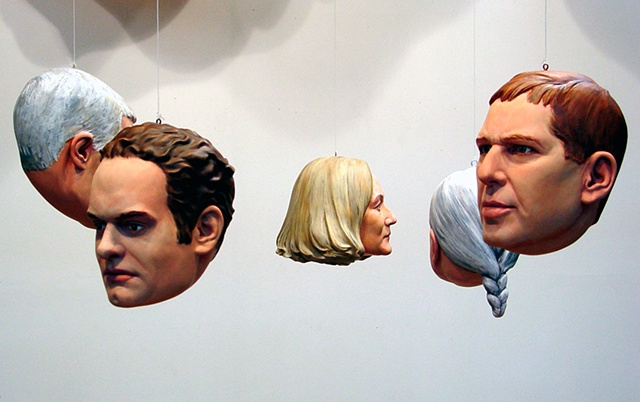 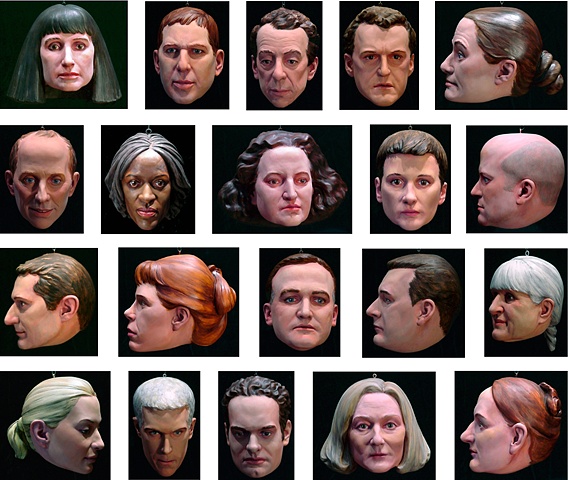 The heads are modeled in clay from observation and photographs and then cast in resin or gypsum and fiberglass and painted in oil. They are roughly life size or smaller and hang at the eye level of each subject.

Pictured here are selections from an ongoing project of heads of people from the art world (artists, gallerists, critics, curators, collectors) have been exhibited in several venues including the National Portrait Gallery in DC, The Aldrich Museum of Contemporary Art in Ridgefield Connecticut and Metaphor Contemporary Art in Brooklyn.

Recent Salamatina Gallery installation of a selection of portrait heads

GENERAL STATEMENT ON PORTRAITS: These portrait heads are part of an ongoing series which I have been working on over the last few years, and intend to continue indefinitely into the future.

I have always been interested in the conventions of the portrait as it is a staple of sculpture through much of art history. The way in which a head is both terminated and displayed are crucial formal considerations that have definite psychological and metaphorical implications.

I am interested in making these heads into autonomous objects, therefore each is rounded into a complete form rather than ended in a cut at the neck. I hope that hanging them at eye level helps to create a suspension of disbelief, allowing the viewer to see the head in its own space, literally and symbolically. As they are at the eye level of each individual, they are in the location that one would encounter the face of the actual person in a social situation. The installation as a whole is designed to evoke the social environment of an opening- clusters of people who would be likely to attend a reception in a white- box gallery space.

Sculpted and painted from observation, these heads are not intended to be hyper-real or special effect-like. They are effigies rather than literal stand-ins for their subjects. I am interested in the problem of achieving a "likeness" as it is both essential to the idea of a portrait and, yet largely irrelevant to the idea of a sculpture. I do think that the specificity and attention involved in achieving a likeness transcend the simple recognizability of a given individual.

These portraits are in one sense a contrast to my other work. In many of my other projects, I use my own head and body as source material. In those pieces, I am interested in treating myself as a stand in for an "everyman" or perhaps an "every woman" and am not interested so specifically in the sculptures or photographs as portraits of an individual.