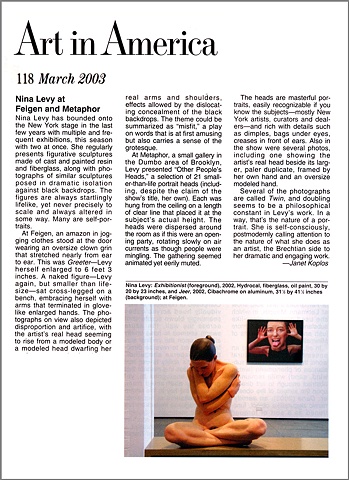 Nina Levy at Feigen and Metaphor

Nina Levy has bounded onto the New York stage in the last few years with multiple and frequent exhibitions, this season with two at once. She regularly presents figurative sculptures made of cast and painted resin and fiberglass, along with photographs of similar sculptures posed in dramatic isolation against black backdrops. The figures are always startlingly lifelike, yet never precisely to scale and always altered in some way. Many are self-portraits.

At Feigen, an amazon in jogging clothes stood at the door wearing an oversize clown grin that stretched nearly from ear to ear. This was Greeter-Levy herself enlarged to 6 feet 3 inches. A naked figure-Levy again, but smaller than life-size-sat cross-legged on a bench, embracing herself with arms that terminated in glove-like enlarged hands. The photographs on view also depicted disproportion and artifice, with the artist's real head seeming to rise from a modeled body or a modeled head dwarfing her real arms and shoulders, effects allowed by the dislocating concealment of the black backdrops. The theme could be summarized as "misfit," a play on words that is at first amusing but also carries a sense of the grotesque.

At Metaphor, a small gallery in the Dumbo area of Brooklyn, Levy presented "Other People's Heads," a selection of 21 smaller-than-life portrait heads (including, despite the claim of the show's title, her own). Each was hung from the ceiling on a length of clear line that placed it at the subject's actual height. The heads were dispersed around the room as if this were an opening party, rotating slowly on air currents as though people were mingling. The gathering seemed animated yet eerily muted.

The heads are masterful portraits, easily recognizable if you know the subjects-mostly New York artists, curators and dealers and rich with details such as dimples, bags under eyes, creases in front of ears. Also in the show were several photos, including one showing the artist's real head beside its larger, paler duplicate, framed by her own hand and an oversize modeled hand.

Several of the photographs are called Twin, and doubling seems to be a philosophical constant in Levy's work. In a way, that's the nature of a portrait. She is self-consciously, postmodernly calling attention to the nature of what she does as an artist, the Brechtian side to her dramatic and engaging work.