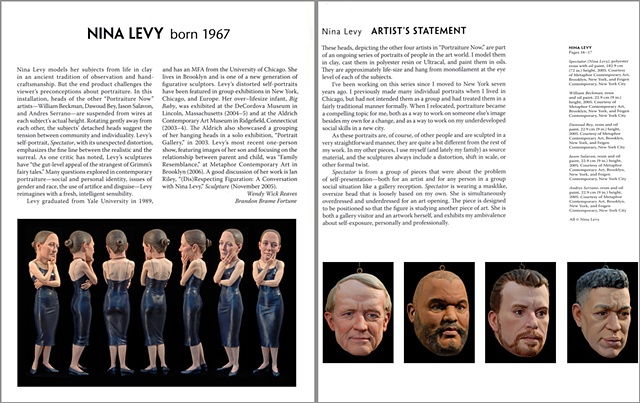 NIna Levy models her subjects from life in clay in an ancient tradition of observation and handcraftsmanship. But the end product challenges the viewer's preconceptions about portraiture. In this installation, heads of the other "Portraiture Now" artists-- William Beckman, Dawoud Bey, Jason Salavon, and Andres Serrano-- are suspended from wires at each subject's actual height. Rotating gently away from each other, the subjects' detached heads suggest the tension between community and individuality. Levy's self-portrait, Spectator, with its unexpected distortion, emphasizes the fine line between the realistic and the surreal. As one critic has noted, Levy's sculptures have "the gut-level appeal of the strangest of Grimm's fairy tales." Many questions explored in contemporary portraiture-- social and personal identity, issues of gender and race, the use of artifice and disguise-- Levy reimagines with a fresh, intelligent sensibility.

Levy graduated from Yale University in 1989, and has a MFA from the University of Chicago. She lives in Brooklyn and is one of a new generation of figurative sculptors. Levy's distorted self-portraits have been featured in group exhibitions in New York, Chicago, and Europe. Her over-lifesize infant, Big Baby, was exhibited at the DeCordova Museum in Lincoln, Massachusetts (2004-5) and at the Aldrich Contemporary Art Museum in Ridgefield, Connecticut (2003-4). The Aldrich also showcased a grouping of her hanging heads in a solo exhibitions, "Portrait Gallery," in 2003. Levy's most recent one person show, featuring images of her son and focusing on the relationship between parent and child was "Family Resemblance," at Metaphor Contemporary Art in Brooklyn (2006). A good discussion of her work is Jan Riley, "(Dis)Respecting Figuration: A Conversation with Nina Levy," Sculpture (November 2005).