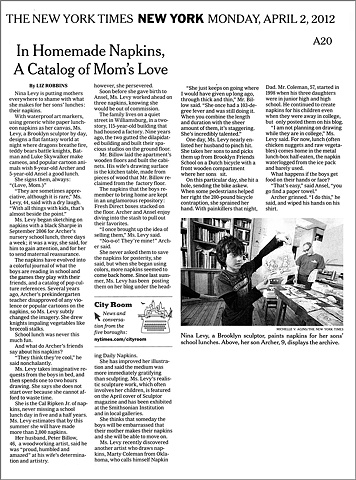 Nina Levy is putting mothers everywhere to shame with what she makes for her sons’ lunches: their napkins. With waterproof art markers and using generic white paper luncheon napkins as her canvas, Ms. Levy, a Brooklyn sculptor by day, designs a flat fantasy world at night where dragons breathe fire, teddy bears battle knights, Batman and Luke Skywalker make cameos, and popular cartoon animals wish 9-year-old Archer and 5-year-old Ansel a good lunch. She signs them, always: (Love, Mom.) “They are sometimes appreciative, although it is rare,” Ms. Levy, 44, said with a dry laugh. “With all things with kids, that’s almost beside the point.”&#8232; Ms. Levy began sketching on napkins with a black Sharpie in September 2006 for Archer’s nursery school lunch, three days a week; it was a way, she said, for him to gain attention, and for her to send maternal reassurance. The napkins have evolved into a colorful journal of what the boys are reading in school, the games they play with their friends and a catalog of pop culture references.&#8232;&#8232;Several years ago Archer’s prekindergarten teacher disapproved of any violence or popular cartoons on the napkins so Ms. Levy subtly changed the imagery. She drew knights impaling vegetables, like broccoli stalks. School lunch was never this much fun. And, what do Archer’s friends say about his napkins? “They think they’re cool,” he said nonchalantly. Ms. Levy takes imaginative requests from the boys in bed, and then spends one to two hours drawing. She will not start over because she cannot afford to waste time. She is the Cal Ripken Jr. of napkins, never missing a school lunch day in five and a half years. Ms. Levy estimates that by this summer she will have made more than 2,000 napkins. Her husband, Peter Billow, 46, a woodworking artist, said he was “proud, humbled and amazed” at his wife’s determination and artistry.&#8232; “She just keeps on going where I would have given up long ago, through thick and thin,” Mr. Billow said. “She once had a 103-degree fever and was still doing it. When you combine the length and duration with the sheer amount of them, it’s staggering. She’s incredibly talented.&#148; One day, Ms. Levy nearly enlisted her husband to pinch-hit. She takes her sons to and picks them up from Brooklyn Friends School in a Dutch bicycle with a front wooden compartment where her sons sit. On this particular day, she hit a hole, sending the bike askew. When some pedestrians helped her right the 200-pound bicycle contraption, she sprained her hand. With painkillers that night, however, she persevered. Soon before she gave birth to Ansel, Ms. Levy worked ahead on three napkins, knowing she would be out of commission. The family lives on a quiet street in Williamsburg, in a two-story 115-year-old factory that most recently made metal garbage cans and wooden caskets. Nine years ago, they gutted the dilapidated building and built their spacious studios on the ground floor. Mr. Billow laid the apartment’s wooden floors, built the shelving, and installed the appliances. His wife’s drawing surface is the kitchen table, exquisitely made from pieces of wood that Mr. Billow reclaimed from the factory floor. The napkins that the boys remember to bring home are in an unglamorous repository: Fresh Direct boxes stacked on the floor. Archer and Ansel enjoy diving into to the stash to pull out their favorites. “I once brought up the idea of selling them,” Ms. Levy said. “Nooooo! They’re mine!” Archer said. She never asked them to save the napkins for posterity, she said, but when she began using colors, more napkins seemed to come back home. Since last summer, Ms. Levy has been posting them on her blog under the heading Daily Napkins. She has improved her illustration and said the medium was more immediately gratifying than sculpting. Ms. Levy’s realistic sculpture work, which often involves her children, is featured on the cover of Sculpture Magazine and has been exhibited at the Smithsonian Institution and in local galleries. She thinks that some day the boys will be embarrassed by their mother making their napkins and she will be able to move on. Ms. Levy recently discovered another artist who draws napkins, Marty Coleman, from Oklahoma, who calls himself Napkin Dad. Mr. Coleman, 57, started in 1998 when his three daughters were in junior high and high school, focusing on aphorisms. He still created napkins for his children even when they were away in college, but only posted them on his blog. “I am not planning on drawing while they are in college,” Ms. Levy said. &#8232;For now, lunch (often chicken nuggets, raw vegetables) comes home in the metal lunch-box, half-eaten, and the napkin waterlogged from the ice pack and barely used. What happens if the boys get food on their hands or face? “That’s easy,” said Ansel, “you go find a paper towel.” Archer grinned. “I do this,” he said, and wiped his hands on his shirt.