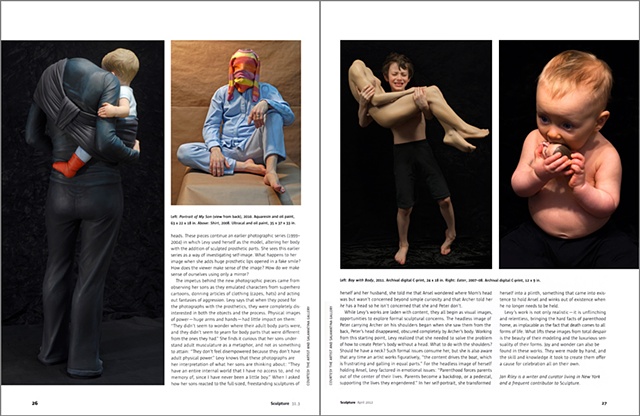 The exhibition "Related Forms" acted as a mini-retrospective for Nina Levy, displaying sculptures and photographs from 1999-2011. Her controversial figurative works, displayed to great advantage in the long, open space of Salamatina Gallery (unexpectedly set in a former Gap store in an upscale shopping mall in Manhasset, New York), caused a stir among shoppers on their way to David Yuman or Prada. Levy has said of her work , "Ideally you want to make a piece that unravels over time and has multiple readings. I think my starting point has always been about trying to play both sides- to make something beautiful and compelling... but that also has a discomforting subtext."

The works in "Related Forms" were all beautiful and compelling, and amply discomforting. Since the birth of her first son, Archer in 2003, Levy has taken the dichotomy of parenthood as her subject: "[A baby] is both an extremely irrational, energetic, and uncontrollable person, and a lovely, celebrated child. And parents are both charmed and terrified at suddenly becoming wholly responsible for someone other than themselves." Levy has chosen to deal with this dichotomy by using images of headless adults. In Husband and Son (2006), she has sculpted her husband, Peter, standing easily, but without a head, while Archer sits serenely unconcerned on his shoulders. In Portrait of my Son (2010), Levy sculpted herself holding Ansel. She too is headless, but she carries Ansel, who is fully supported by an ergonomic carrying sling.

As the children have grown, the parents have been granted heads- covered by tiny T-shirts. The little sleeves poke up like mismatched ears, and the overall effect is initially comical. The levity fades rapidly, though, as somber features come into view under the sculpted knit fabrics, and it becomes clear that the figures are not only blind and deaf, nut also in danger of suffocation. Shirt Heads (2009) come most often only as heads, but occasionally they have complete bodies, as in Shirt (2008) which portrays Peter seated and cowled by a tiny T-shirt.

Levy's newest body of work is a photographic series of her sons interacting with large sculpted resin body parts. Boy with Fist (2011), Boy with Body (2011) and Boy with Arms (2011) juxtaposed small and fragile human bodies with oversize arms, hands, feet, and heads. These pieces continue an earlier photographic series (1999-2004) in which Levy used herself as the model, altering her body with the addition of sculpted prosthetic parts. She sees this earlier series as a way of investigating self-image. What happens to her image when she adds huge prosthetic lips opened in a fake smile? How does the viewer make sense of the image? How do we make sense of ourselves using only a mirror?

The impetus behind the new photographic pieces came from observing her sons as the emulated characters from superhero cartoons, donning articles of clothing (capes, hats) and actin out fantasies of aggression. Levy say that when they posed for the photographs with the prosthetics, they were completely disinterested in both the objects and the process. Physical images of power- huge arms and hands- had little impact on them: "They didn't seem to wonder where their adult body parts were, and they didn't seem to yearn for body parts that were different from the ones they had." She finds it curious that her sons understand adult musculature as a metaphor, and not as something to attain: "They don't feel disempowered because they don't have adult physical power." Levy knows that these photographs are her interpretation of what her sons are thinking about: "They have an entire internal world that I have no access to, and no memory of, since I have never been a little boy." When I asked how her sons reacted to the full-sized, freestanding sculptures of herself and her husband, she told me that Ansel wondered where Mom's head was but wasn't concerned beyond simple curiosity, and that Archer told her he has a head so he isn't concerned that she and Peter don't.

While Levy's works are laden with content, they all begin as visual images, opportunities to explore formal sculptural concerns. The headless image of Peter carrying Archer on his shoulders began when she saw them from the back, Peter's head disappeared, obscured completely by Archer's body. Working from this starting point, Levy realized that she needed to solve the problem of how to create Peter's body without a head. What to do with the shoulders? Should he have a neck? Such formal issues consume her, but she is also aware that any time an artist works figuratively, "the content drives the boat, which is frustrated and galling in equal parts." For the headless image of herself holding Ansel, Levy factored in emotional issues: "Parenthood forces parents out of the center of their lives. Parents become a backdrop, or a pedestal, supporting the lives they engendered." In her self-portrait, she transformed herself into a plinth. something that came into existence to hold Ansel and winks out of existence when he no longer needs to be held.

Levy's work is not only realistic- it is unflinching and relentless. bringing the hard facts of parenthood home, as implacable as the fact that death comes to all forms of life. What lifts these images from total despair is the beauty of their modeling and the luxurious sensuality of their forms. Joy and wonder an also be found in these works. They were made by hand, and the skill and knowledge it took to create them offer a cause for celebration all their own.