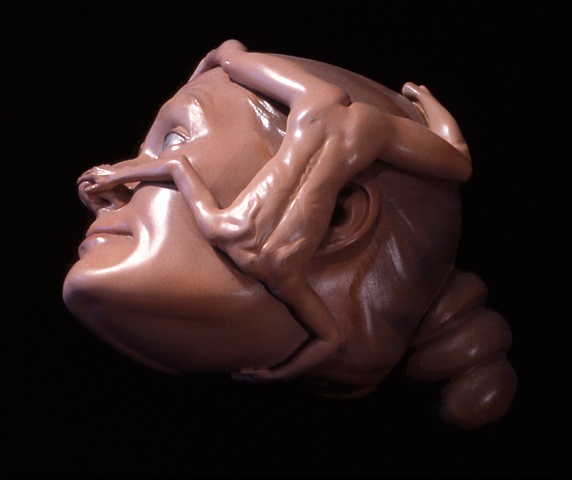 I made Afterthought some dozen years ago when I was using my own image as the source material for much of my sculpture and photographs. I was positing myself as a sort of "Everyman" generic figure...in the very limited and almost irrational sense that a young, white, graduate school educated, female artist could be an "Everyman."

In this piece, as in many others, I was interested in the metaphorical implications of separating the head from the body. There is always the obvious interpretation that the head stands for the mind and the body stands only for itself, for the physical world…or more often than not with a female body, for sexuality. Nonetheless, I find that the relationship can also be more complex and ambivalent.

The head in Afterthought is a fairly standard life-sized, somewhat idealized self- portrait head that has been rounded into a completely self-contained object. It is not exactly decapitated, as it is an organism that never would have had a body. The body is similarly rendered as if it never had a head, and is around the size of a toy or action figure.

I was thinking of an old optical illusion cartoon "What Does a Man Have on his Mind?" where a man (identified as of Sigmund Freud) has a face and forehead that is actually composed of a small naked female body, suggesting that all men think about is sex.