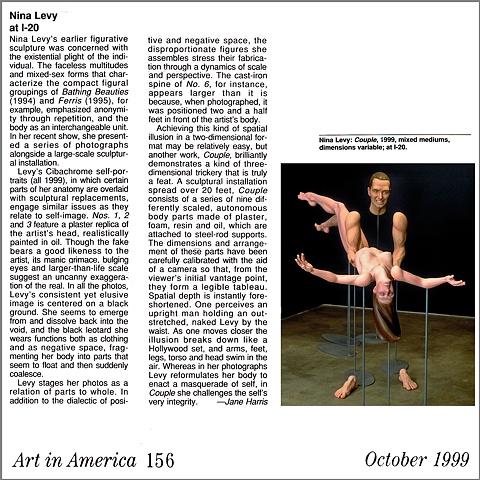 Art In America Review,
I-20 Gallery,
By Jane Harris
< previous

Text of the review:

Nina Levy's earlier figurative sculpture was concerned with the existential plight of the individual. The faceless multitudes and mixed-sex forms that characterize the compact figural groupings of Bathing Beauties (1994) and Ferris (1995), for example, emphasized anonymity through repetition, and the body as an interchangeable unit. In her recent show, she presented a series of photographs alongside a large-scale sculptural installation.

Levy's Cibachrome self-portraits (all 1999), in which certain parts of her anatomy are overlaid with sculptural replacements, engage similar issues as they relate to self-image. Nos. 1, 2 and 3 feature a plaster replica of the artist's head, realistically painted in oil. Though the fake bears a good likeness to the artist, its manic grimace, bulging eyes and larger-than-life scale suggest an uncanny exaggeration of the real. In all the photos, Levy's consistent yet elusive image is centered on a black ground. She seems to emerge from and dissolve back into the void, and the black leotard she wears functions both as clothing and as negative space, fragmenting her body into parts that seem to float and then suddenly coalesce.

Levy stages her photos as a relation of parts to whole. In addition to the dialectic of positive and negative space, the disproportionate figures she assembles stress their fabrication through a dynamics of scale and perspective. The cast-iron spine of No. 6, for instance, appears larger than it is because, when photographed, it was positioned two and a half feet in front of the artist's body.

Achieving this kind of spatial illusion in a two-dimensional format may be relatively easy, but another work, Couple, brilliantly demonstrates a kind of three-dimensional trickery that is truly a feat. A sculptural installation spread over 20 feet, Couple consists of a series of nine differently scaled, autonomous body parts made of plaster, foam, resin and oil, which are attached to steel-rod supports. The dimensions and arrangement of these parts have been carefully calibrated with the aid of a camera so that, from the viewer's initial vantage point, they form a legible tableau. Spatial depth is instantly foreshortened. One perceives an upright man holding an outstretched, naked Levy by the waist. As one moves closer the illusion breaks down like a Hollywood set, and arms, feet, legs, torso and head swim in the air. Whereas in her photographs Levy reformulates her body to enact a masquerade of self, in Couple she challenges the self's very integrity.