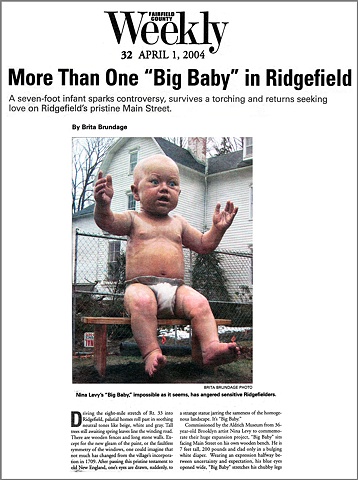 More Than One "Big Baby" in Ridgefield

Driving the eight-mile stretch of Rt. 33 into Ridgefield, palatial homes roll past in soothing neutral tones like beige, white and gray. Tall trees still awaiting spring leaves line the winding road. There are wooden fences and long stone walls. Except for the new gleam of the paint, or the faultless symmetry of the windows, one could imagine that not much has changed from the village's incorporation in 1709. After passing this pristine testament to old New England, one's eyes are drawn, suddenly, to a strange statue jarring the sameness of the homogenous landscape. It's "Big Baby."

Commissioned by the Aldrich Museum from 36-year-old Brooklyn artist Nina Levy to commemorate their huge expansion project, "Big Baby" sits facing Main Street on his own wooden bench. He is 7 feet tall, 200 pounds and clad only in a bulging white diaper. Wearing an expression halfway between uncertainty and expectation, his blue eyes opened wide, "Big Baby" stretches his chubby legs and reaches his fat hands to the street as if saying "Hug me. Love me. Please?"

Not everyone in Ridgefield feels the stirring of maternal instinct. Some longtime residents are downright outraged. "Baby Taints Village" crows the headline in the Dec. 4 Ridgefield Press "Letters to the Editor" page. "I have for years proudly showed Main Street to out-of-town visitors. No more," writes Robert Jones of Branchville Road. "Main Street has been turned into Coney Island East by the presence of The Baby." Barbara Watson of Nod Road writes in the Dec. 18 issue that the statue is "an insult," "disgusting" and asserts that "there are many people young and old who despise it. "I am surprised no one has spray painted it yet," she continues.

Certain residents once showed warm affection for the giant infant. When he was installed last November, one resident decorated him with a hat and scarf. Another gave him a sign that read "Welcome, Baby Jesus." But "Big Baby" also became a target for more malicious Ridgefield mischief-makers. Under the cloak of night on Jan. 2, two young men held a road flare to "Big Baby"'s left fiberglass cheek, attempting to set him on fire. A passing motorist stopped and chased the vandals off, but the damage was done. After reconstructive surgery by Levy at Jim Felice's autobody shop in South Salem, N.Y., The Baby was reinstalled March 19 and a security camera added. But with historic district regulations preventing any night-time illumination and the baby's innocence and size inviting response, the tension remains.

"Everybody is projecting what they want onto this baby," says Amy Grabowski, the Aldrich's public relations director. "If it was an abstract sculpture, I don't think it would be a big deal, but it's a baby." She stresses that a lot of folks missed the big guy after the trauma. "I've had at least five phone calls from moms in the last month saying, 'When is the baby coming back? We've really missed the baby,'" she says.

The artist, watching the chaos unfold from afar, was not surprised the piece was vandalized, since that's the nature of public sculpture. But having raised ire with her mostly nude adult women and men pieces, often shown with heads floating above their bodies so that they only look whole from specific angles, she was surprised something so benign as a diaper-clad baby would spark such controversy at all.

"I think there was something to picking the most innocuous, ingratiating image possible, although it didn't necessarily win over everyone. And I softened it up. Originally it was screaming and much more aggressive. I decided it was large enough that it really didn't need to be screaming," she said. Were the statue in Brooklyn, Levy says, she couldn't imagine getting the same degree of response. "I'm incredibly flattered that people would bother to get worked up over temporary sculpture," she says. "Not that I enjoy irritating people, but that they would care that much is lovely. In this neighborhood [Williamsburg, Brooklyn], most people wouldn't take an interest or they would just wait for it to go away."

Levy's earliest work was crafting dolls for a collectibles company, which bled into her artwork in the form of hanging baby heads. These pieces, a decade old, still resonate with the pubic, making "Big Baby" a natural extension. Except she got pregnant and gave birth to a son just prior to sculpting and that changed everything.

"I had an entirely different spin than the previous work which was about dolls. Maybe against my better judgment in some ways, because my previous images of babies were very ironic and made by someone who had no actual contact with real live babies. So this one is quite different and much less ironic. And it struck a chord with the museum for many reasons, not least of which was the new building."

For the Aldrich Museum, opening in an entirely new space behind the former Revolutionary War-era historic building in June, a baby, especially a big one, is the perfect complement. With construction well under way, the ground upturned, the site surrounded by metal fencing and crawling with construction workers, "Big Baby"'s visual metaphor--a new, welcoming, artistic entity--could not be missed. His face dusted with rainwater, his cheeks round and toes curled, he is innocence personified.

But Ridgefielders are a sensitive bunch.

"The baby is not only totally inappropriate and unattractive," wrote Hope Swenson of Wilton Road in the Dec. 11 issue of The Ridgefield Press , "it also seems in dire need of a diaper change."

Levy laughs off this particular criticism. She toyed with the idea of an entirely nude baby, saying, "I admit as a new mother who is totally infatuated with how lovely my son is, I did consider not having the diaper, but it was only brief." Instead, she modeled the white diaper after "a commercially-available disposable diaper, so it has a sort of large bulge in the crotch which some people found upsetting. But I observed that most disposable diapers look like that even if they aren't full."

In May, Big Baby and the bulging diaper were to be permanently removed for the installation of the next piece in the new and indefinitely-ongoing Main Street Sculpture Project. But Grabowski says the Aldrich now intends to keep "Big Baby" and install it between the old museum and the new. Take that, baby-haters. The new sculpture coming in May will be Jon Conner's "Self Sufficient Barnyard (the annual amount of livestock needed to feed a family of four)" featuring 41 Styrofoam animals including a cow, a goat, a pig and at least 12 chickens. If Ridgefield residents find farm animals as offensive as babies, readers of the Ridgefield Press are in for a treat.