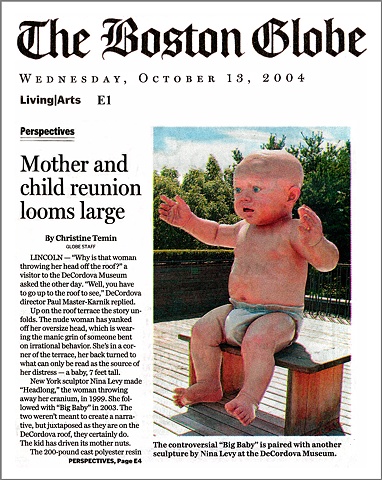 Text of the article:

LINCOLN -- "Why is that woman throwing her head off the roof?" a visitor to the DeCordova Museum asked the other day. "Well, you have to go up to the roof to see," DeCordova director Paul Master-Karnik replied.

Up on the roof terrace the story unfolds. The nude woman has yanked off her oversize head, which is wearing the manic grin of someone bent on irrational behavior. She's in a corner of the terrace, her back turned to what can only be read as the source of her distress -- a baby, 7 feet tall.

New York sculptor Nina Levy made "Headlong," the woman throwing away her cranium, in 1999. She followed with "Big Baby" in 2003. The two weren't meant to create a narrative, but juxtaposed as they are on the DeCordova roof, they certainly do. The kid has driven its mother nuts.

The 200-pound cast polyester resin and fiberglass child was commissioned by the Aldrich Contemporary Art Museum in the affluent community of Ridgefield, Conn.

The museum intended the sculpture to divert attention from the renovation and expansion that necessitated its closing last winter. A baby would also symbolize the museum's rebirth. The last thing the Aldrich anticipated was a controversy. The museum's public-relations director, Amy Grabowski, remembers some affectionate gestures toward the overgrown tot. "Somebody put a sign on him that said `Welcome Baby Jesus,' " she says. (In the growing body of literature on the sculpture, "Baby" is generally referred to as "he.")

One resident dressed the baby against the cold, the way tourists in Brussels dress the "Mannequin Pis," the little bronze tyke peeing into a fountain. But the "Mannequin Pis" is a beloved symbol of a city. Many Ridgefielders, who are proud of their history dating back to before the Revolutionary War, adamantly did not want their own cute kid to become the town logo.

The headline "Baby Taints Village" screamed forth from the Dec. 4 edition of The Ridgefield Press. Later that month, Ridgefield resident Barbara Watson wrote to the newspaper that "Baby" was "disgusting."

"I am surprised that no one has spray painted it yet," she went on. Some did worse: In January, two young men set "Baby" aflame in an attempt to incinerate him.

Fiberglass proved stronger than flesh. "Baby" convalesced in the sculptural version of the Shriners burns hospital -- an autobody shop. On recovery, mother and child were shipped to Lincoln for a breather: They now overlook a majestic New England autumn, of which they're utterly unaware. They're completely self-absorbed.

Reactions to art -- especially when it's in a public venue -- are easily whipped into hysteria that can lead to censorship. It's nothing new. In 1573 the Inquisition objected strongly to a "Last Supper" painted by Veronese: It featured realistic details including an apostle wielding a toothpick to clean his teeth. Pragmatist that he was, the artist left the painting alone, simply changing its title to "Feast in the House of Levi," where toothpicks weren't such a big deal.

Closer to home, and closer in time, in the 1980s the artist Michael Timpson installed a circle of pristine white toilets in the lobby of Boston's Transportation Building on Stuart Street. The work was greeted with comments including "What if children saw it?" (In raising my own children, seeing a toilet sooner rather than later always seemed a good thing.)

What the Veronese painting was to the Inquisition, what Timpson was to the state's transportation bureaucrats, Levy's "Baby" became to Ridgefield.

Sure, "Baby" is blond, blue-eyed, pudgy, and dimpled. Sure, he has a more than passing likeness to the infant Christ in the great Botticelli "Madonna of the Eucharist" in the Isabella Stewart Gardner Museum. But while the Botticelli is bittersweet, prefiguring Christ's fate, "Baby" is a different and altogether more threatening creature. His eyes and mouth are wide open; his feet and legs suggest wriggling and kicking; his arms are outstretched because he wants to grab something or someone. He's the kid who won't sleep through the night until he's in adolescence, the kid you have to watch every second because otherwise he'll fall down the stairs or crawl into the street. He's exhausting to his poor mother -- and he's too big to ignore.

"Baby" is clothed in a diaper, modest attire not seen in images of the baby Jesus until puritanical times dictated that either his pose or some drapery hide his infant penis. Even the sculpture's diaper provoked wrath. Writing about the "Baby" saga in the Fairfield County Weekly, Brita Brundage noted that Levy modeled the diaper on the kind of disposable ones you pick up at the supermarket. Perhaps people in Ridgefield think that cloth diapers are superior in some way and that God made nannies to change them and diaper services to whisk the soiled ones away. Perhaps they consider disposables déclassé. One upright local citizen, Hope Swenson, wrote to The Ridgefield Press that in addition to its other offenses, the sculpture "is in dire need of a diaper change."

Levy countered that "most disposable diapers look like that even if they aren't full." She knew, by then, from personal experience. By the time "Big Baby" was being fabricated, Levy had a small baby of her own. Construction workers in her Brooklyn building, watching her struggle with both her newborn and a 7-foot effigy of a baby, "thought that I had some kind of post-partum derangement," she says.

‘‘Big Baby’’ and ‘‘Headlong’’ are at the DeCordova Museum and Sculpture Park, Lincoln, through next autumn.